skip to main | skip to sidebar

Brag about your new route. Tell a tall tale. Input your feedback

The System Works with NZAC reply

The System Works
The Wanaka area is a rock climbing resource enjoyed by many, this recreational resource has been possible largely due to an enthusiastic group of volunteers who had the foresight many years ago to form the Wanaka Rock Climbing Club, which, a few years later, evolved into a not-for-profit incorporated society based upon conservation and development of the Wanaka area. Over the years, WRCC has maintained both route information and crucial relationships with local land managers and the Department of Conservation. WRCC has a Memorandum of Understanding with DOC that outlines both parties mutual responsibilities. There are currently about 800 routes in the Wanaka area and it is now a highly rated, all season sport climbing destination. WRCC proceeds have also spilled over into development and maintenance of many neighbouring South Island climbing areas. WRCC’s success is a direct result of funding derived from the sale of a local guidebook. The system in Wanaka is a model of success to be emulated around the country. The beneficiaries of this system are all New Zealand climbers, including NZAC members, educational groups and international visitors.
Now, the editors of Rock Deluxe intend to publish a new edition of their guidebook, which will include Wanaka area information, without any financial consideration for WRCC. The editors want to freely collect, then alter and publish local information for their own benefit and personal profit. NZAC is supporting this publication, adding prestige and significant distribution capabilities. From past experience, the economic result of Rock Deluxe and other guides like it is a financial disaster for non-profit local climbing communities who want to generate their own funds from the sale of local guidebooks. Additionally, NZAC is facilitating the consolidation of an online national database of route information, which may be used in the future for other commercial guidebook ventures. Should WRCC be expected to give up our ethical, moral and legal copyright for the benefit of a few? Are we meant to abandon our primary source of funding due to financial risk? How will we conserve the Wanaka area climbing resource without adequate funding? The answers to these questions may set a new and worrisome future precedent, which will jeopardise the relevancy and the effectiveness of local clubs like WRCC.
Respectfully, we request that the editors of Rock Deluxe make a donation to WRCC for the publication of any Wanaka area rock climbing information. Furthermore, we request that NZAC investigate a new guide information system that will continue the funding for local climbing clubs which conserve of our common resources for the benefit of future generations. Rock climbing in Wanaka is a growing asset to New Zealand. The system works.
–Greg Johnston, on behalf of the Wanaka Rock Climbing Club, Incorporated.

NZAC responds:
In my capacity as NZAC Publications Convenor, I respond to Greg Johnston’s letter sent on behalf of the Wanaka Rock Climbing Club (WRCC).
First, it is important to acknowledge WRCC’s outstanding contribution to securing and maintaining access to the great rock climbing in and around Wanaka. We are all acutely aware of how important good access arrangements are to the continued development of climbing in New Zealand, and the Club supports all positive local access initiatives. The Club also recognises that (sometimes) important access work is time-consuming and thankless. So thanks WRCC!
As to the publications issue, WRCC is concerned that publication of Wanaka rock climbing information in the proposed second edition of Rock Deluxe will compromise sales of WRCC’s own guidebook. WRCC appears to regard that information as proprietary (a debatable proposition) and wishes to protect its guidebook revenue stream to subsidise route maintenance and development; that is what WRCC calls the ‘system’.
Plainly, that system has worked. However, it is not the only system. And it is also not without its drawbacks. Two drawbacks that spring to mind are: (a) overpriced, poor quality guidebooks and (b) poor quality routes. Obviously there is a subjective element at play here, but I believe both have been byproducts of the WRCC system.
The Club’s role is to foster climbing in New Zealand. In the present context, the Club considers that is best achieved by (a) free access to basic crag and route information for all climbing areas in New Zealand, (b) production of high-quality guidebooks for those who want more than just the ‘basics’ and (c) a well-funded bolting fund that Wanaka climbers (as well as everyone else) can utilise for subsidised route development.
As far as I am aware, the authors of Rock Deluxe are aligned with that vision and they propose to make a donation for every book sold to the the bolting fund. As distributor of the book, any Club income from the book will inevitably be channeled back into the Club’s many climbing-focused activities.
All of the above is, I believe, ultimately positive for New Zealand climbing, even for the WRCC. As the saying goes, a little competition can’t hurt, and I would encourage Greg and the other WRCC members to meet the Rock Deluxe challenge head on—by producing a high-quality guidebook befitting the outstanding resource they have helped develop and maintain, and to spend the proceeds from that endeavour on establishing more great routes for the masses to enjoy.
–John Palmer

Letter back Climber Magazine
Hi Kester –
Now it is official in your international climbing magazine, the NZAC leadership supports the claim that volunteer not for profit efforts of the WRCC have resulted in “overpriced, poor quality guidebooks and poor quality routes.”
John Palmer is simply regurgitating Ivan’s distorted position and specifically naming me to remedy a future outcome adds personal insult. I would like to know how many NZAC members would agree with this ridiculous assertion.
Unfortunately, John Palmer completely glossed over the probability that Ivan and Kate stand to personal profit, in excess of $100,000 for their publication. And cleverly, he did not mention that NZAC will likely move away from a bolting fund in favour of a general access fund that may not directly fund subsidized bolting.
Accolades and encouragement to produce “more great routes for the masses” are meaningless while NZAC supports private interest groups to compete with non profit incorporated societies.
I think it would be worthwhile for your reader to have all the information.
Greg Johnston
Posted by Boulderdash 3 comments:

Check out this action at Cattle Yard and Tombstone. 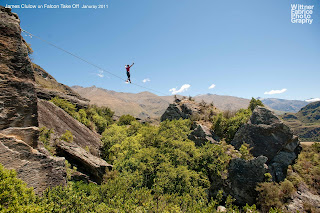 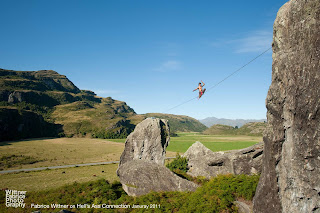 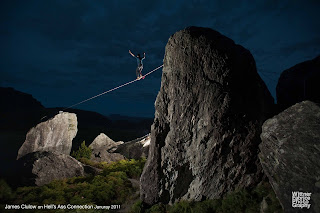 I am entering this post on behalf of travelling climbers, Alex Wilkinson & Kathryn Cooper who bolted a new line between Sunny Mondays and Sweet Sixteen with guideance from Glen E.

The route has pretty much been wet since just after they started so I am not sure whether or not the route has been climbed or not. They mentioned that they would confirm the grade when the route dries out, hmmmm.

In any case, they have given the route a name "The Deadline" and a grade of 26+.
Posted by Boulderdash 1 comment: 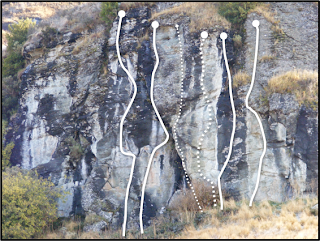 Climbs from Left to Right

Was He Pushed? Grade 21 ***
Existing Route for reference 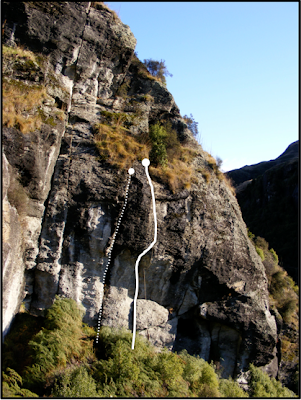 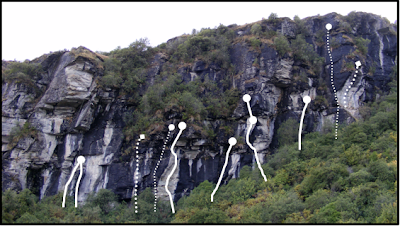 From Left to Right:

After Bush - existing route for reference

Whodunnit? - Grade 16, 25m, 10 bolts - Greg Johnston '10
This route was an obvious project until unknown Scumbags stole my mana, 3 quickdraws and a biner. The first bolt hanger was removed to keep people off, but it didn't work. Free booty halfway up the climb lured the ignorant perpetrators up the dirty friable rock. The route is impossible to clean without a fixed rope or, in this case, directional aids. Adding insult and cheek to my drama, the proud meat-sacks wrote in chalk their proposed over-grade (18) with stars next to the bolt stud. The route would be a classic for the grade if wasn't dirty and tainted. My energy is gone forever but I would like my kit back. Maybe the offenders will front up, return my stolen gear and finish cleaning the climb. 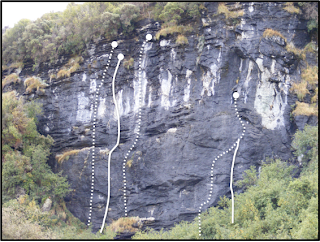 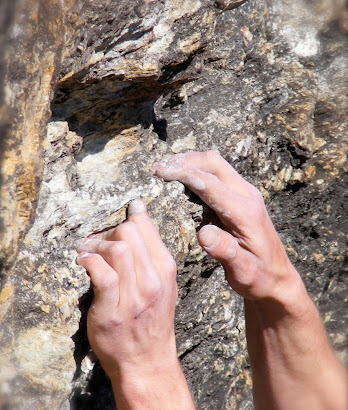